One problem (that is pretty inevitable in a game based off chess) is sometimes when I was down to the last enemy on a level, I would have to chase them around for a while before being able to capture them

ez. loved the concept enjoyed it a lott 🤧💗

Enjoyed the game. Got stuck in an end case where I and the opponent were both bishops on the same color square, so we couldn't damage each other.

What I've figured out:
1) The enemy can only move the highlighted piece.  This, of course, means that the enemy is weaker the more pieces they have, which in turn means you should prioritize dangerous pieces-- like the queen or bishops-- while leaving worthless pieces (knights, pawns far from promoting, rooks on most maps) alive to help you out.

2) The enemy prefers attacking, moving close to the player, making long moves, and moving to a space you can attack.  They will always attack you if they can, and if they can't they will move as far as possible to a space closeish to you, but they won't, for example, line up an attack with a rook if they can keep moving instead.  If there are multiple spots, they'll try to choose the one you can kill them on. The enemy neither deliberately walks on nor avoids spikes.

3) If the enemy moves to a space, they'll probably be happy to move there again.  This is an important principle in Knight v Rook endgames, for example.  Position your knight to attack where the rook was last turn and you have good odds they'll go back to that spot (obviously make sure not to move to a space they can target, though)

Pawn: Turns into a rook on reaching the last rank

Bishop: Can't attack spaces of its own color, only spaces of the opposite color.  Gets boxed in very easily by same-colored bishops.

Rook: Low damage, but can one-shot targets next to board edges buy hitting them off the board.

Knight: Loves to move next to you without attacking so you can easily kill it. If you are the Knight you get an extra turn on kills, which isn't actually very useful beyond replicating the normal 'ranged' behaviour of your attack.

Queen: Gets permanent +1 Dmg every time it moves.

King: Summons a Knight every time it moves, killing its own army with wasted turns.

When promoting, you are always choosing between Knight Bishop and Rook, but must change your choice every level for the whole game.  Rooks are obviously the best because they can move properly, but Knights are generally the other piece you will want because despite taking forever to do anything, at least they can avoid getting boxed in like bishops do and their ranged attacks are fine enough to finish most levels.

I think the pawn turns into whatever piece you picked for that round.

I liked the music and the graphic style, but I found the game rules a little confusing. 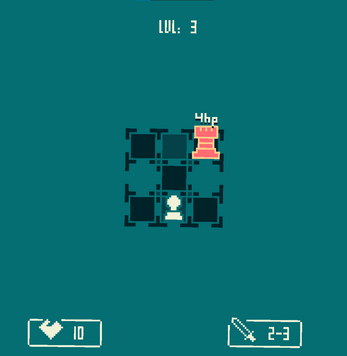 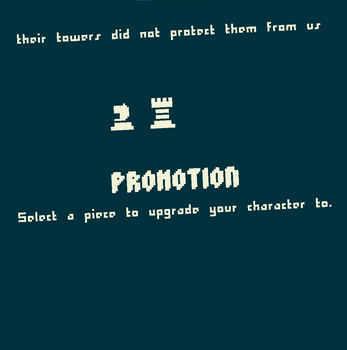